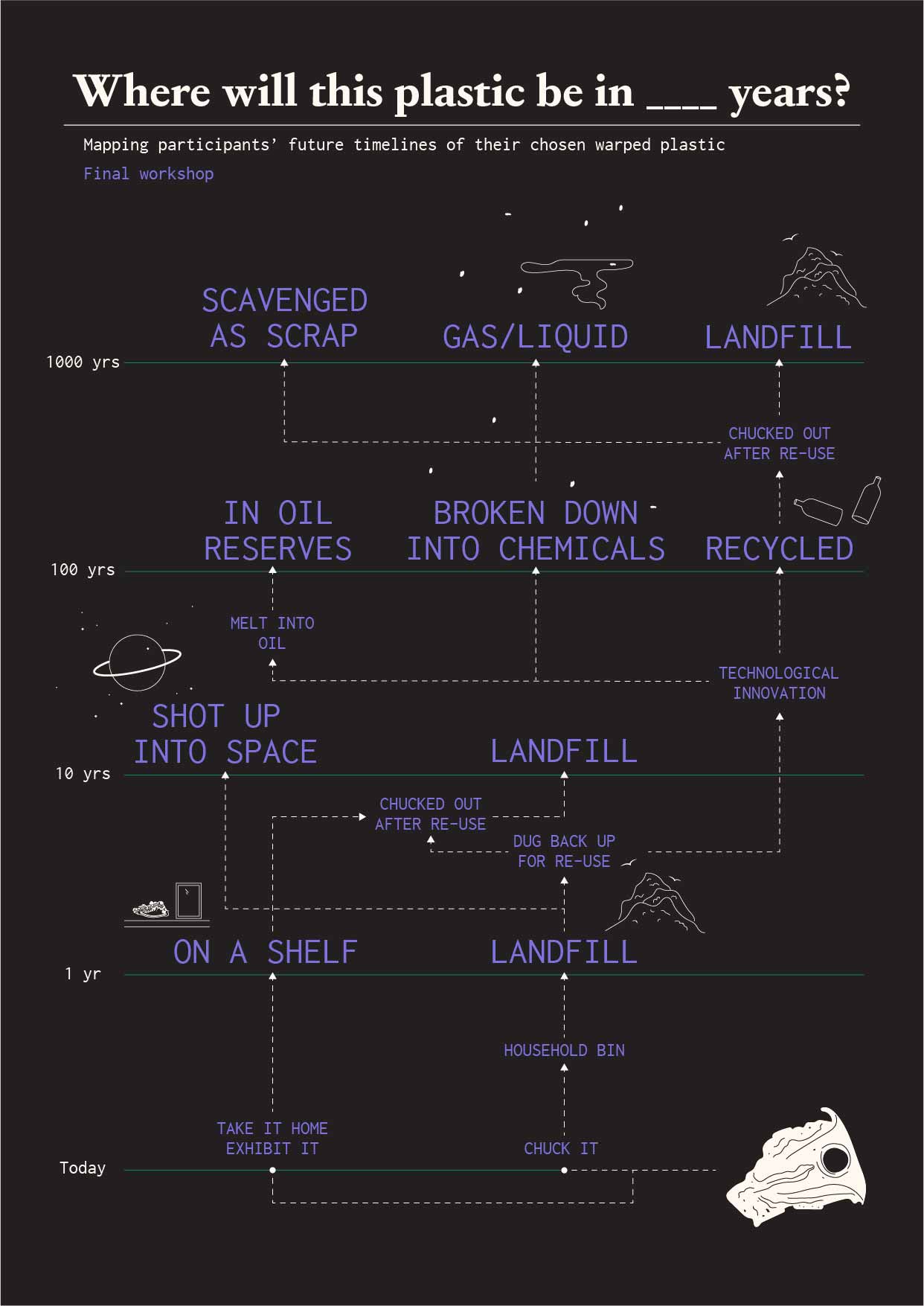 Figure 76
The future timelines of plastic discussed by participants of the Stories from the Afterlife Final Workshop.

Storytelling prompts in this Final Workshop asked participants to map and consider the 1 year, 10 year, 100 year and 1,000 year future of a warped plastic they had chosen (Figure 76). Participant responses to these prompts followed predominantly human-centred perspectives. There is a focus in their responses on how future technological innovation can manipulate and respond to problems of waste. This solutions-focused perspective is central even in mentions of outer space—which, while used more fictitiously and humorously in previous Trial Workshops—are discussed in this workshop as a potential solution avenue:

“Can we put them up on asteroids? What are the space ethics of sending plastic out to space?”

And while the 1,000 year discussions exhibit consideration of how plastic may have transformed (Figure 76), these transformations are attributed to events of human manipulation and advancements in waste infrastructures. Due to this more solutions-based mentality, nonhuman thought therefore did not enter the discussion. Discussions and realisation of the deep timescale of plastic were also not overtly present, perhaps as a result of participants speculating within a human-centred worldview, which prevented opportunities for nonhuman ontologies to surface. Their interpretation of the prompts and the plastic were grounded in a desire for a tangible solution to the issue of plastics and consumption in general. This brings into question whether pre-existing knowledge or familiarity with the issue of plastic impacts on participants’ abilities to embrace alternative perspectives in the form of nonhuman ontologies.

When given hypothetical custodianship of their plastic, two out of the three participants immediately stated their desire to dispose of it. They regarded their plastic as having fully served its function:

“I’m not going to do anything with it. It’s run its course”

Participants once again focused discussions on future technological innovations in response to custodianship prompts. Custodianship of the plastic did not facilitate impactful considerations of deep time in participants, nor did it facilitate discussions around how their actions of disposing this plastic would have deep time ramifications. The tendency of the participants in this group to remain unaffected by the workshop prompts are made even more apparent in their responses to the follow-up survey, and in their descriptions of what they gained from the workshop.

Impact of the workshops on participants 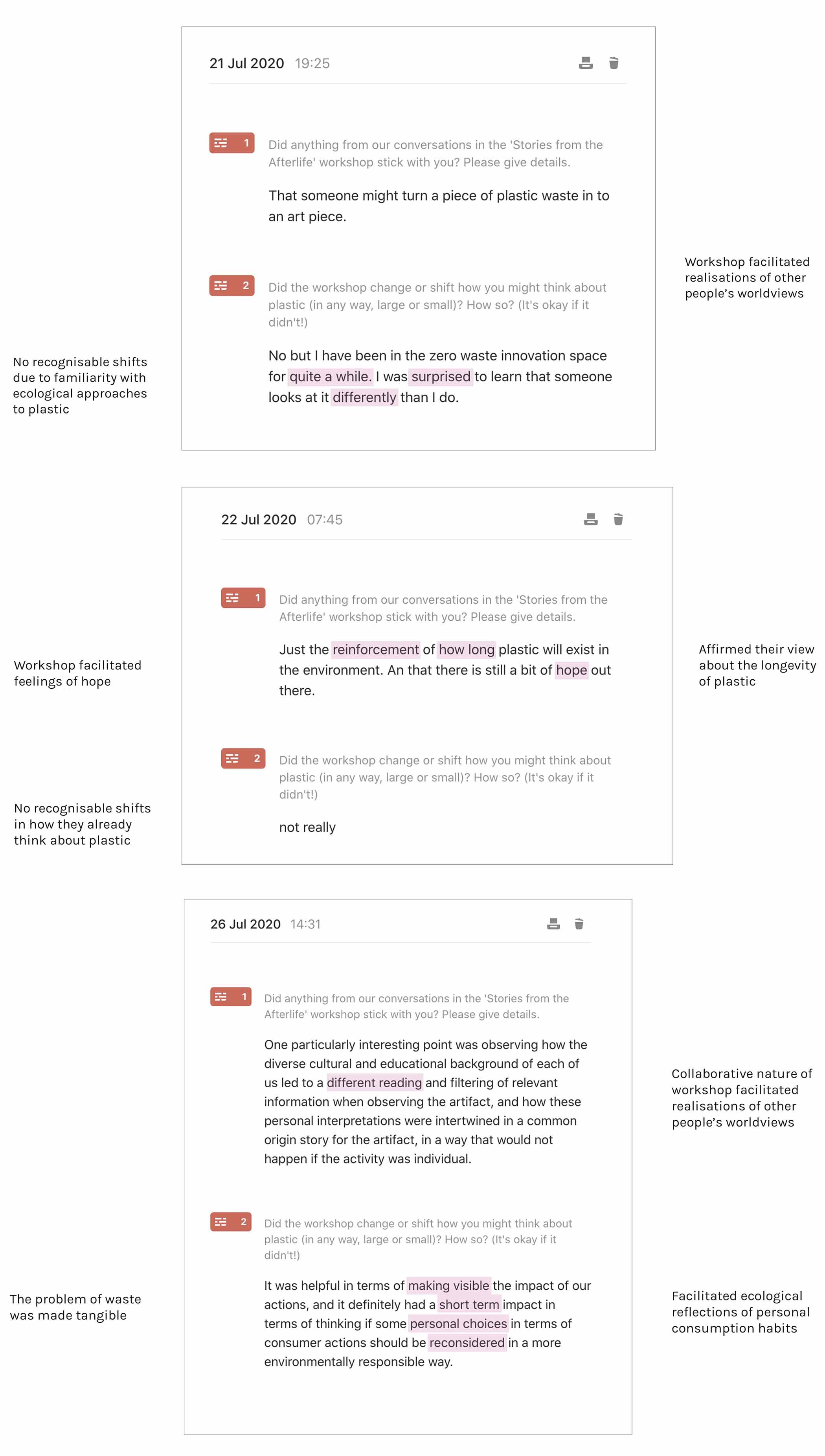 The responses of participants to the follow-up surveys were used to determine the impact of the workshops on participants, and to see whether the workshops inspired an increased sense of ecological responsibility in participants. All three participants from the workshop responded to this follow-up survey (Figure 77).
‍
For one participant, storytelling about their plastic succeeded in enabling them to visualise the ongoing impacts of plastic. This made them more motivated to change their behaviours, and highlights that these workshops can facilitate ecological responses in participants.
‍
For the other two participants, however, the workshops only affirmed what they already knew. One of these participants even expressed surprise that there were other worldviews than their own and specifically stated that they were not changed in any way because they were already familiar with fields of sustainability. This perhaps explains why deep time considerations were not fully present in the workshop; having a familiarity with plastic limited their exploration of these concepts. This once again points to how a pre-existing familiarity and expertise with plastic can limit how much a participant is open to exploring alternative framings and approaches to plastic.

The absence of deep time consideration and conversation amongst the participants of the Final Workshop highlights that the nature of the prompts may not be effective in visualising longevity for all participants. Considering Stoknes’ arguments that “different audiences need to hear different stories” (2015, p. 149), it is evident, then, that exploring the persistent afterlives of plastic as a way to access ecological thought is not suitable for all participants. These results serve as a reminder that we cannot design for everyone (Martin & Hanington, 2012, p. 132). The difference in response in terms of impact from these participants highlights that these workshops may only affect a specific type of participant, as outlined below.

Conclusions for
Stories from the Afterlife

In summary, the responses of participants from all Stories from the Afterlife workshops revealed that:

These differences in response were not dependent—as I had previously hypothesised—on the disciplinary background of the participant; both those from creative fields and empirical fields did and did not adopt nonhuman scales of time. Instead, the measure of the workshop’s success seems to be determined by the pre-existing ecological awareness of participants. Participants who strongly identified as ecologically minded—like those in the Final Workshop—were less affected by concepts of time and did not engage in dialogue about nonhuman timelines or the afterlives of plastic. The participants in the Trial Workshops, in comparison, did embark on conversations around the nonhuman longevity of plastic. They were ecologically aware, but not to the extent of having dedicated their careers and personal behaviours to sustainability.
‍
In reference to Martin and Hanington’s arguments that “attempting to design for everyone results in unfocused or incoherent solutions” (2012, p. 132), results such as these highlight that these workshops should recruit and design for specific types of individuals in mind. This builds on the ideas of Alan Cooper, specifically the development of personas (1999). Cooper states that a persona is “a precise description of our user and what he wishes to accomplish” (1999, p. 123), and that it is the development of these personas which make a design successful and relevant. Using the insights gained from the background of my participants, potential personas that these workshops do and do not cater to can be identified.
‍
The factors identified earlier as influencing the participants’ response to the workshops display a similarity to Stoknes’ measure of social attitudes to climate change (2015, p. 58). As such, I will reference and adopt Stoknes’ social attitudes as personas for these workshops. Specifically, two of Stoknes’ attitudes align with the perceived mindsets of the participants who attended the Stories from the Afterlife workshops. These have been adjusted to better suit the values present in the workshops:

Stoknes describes those with attitudes of alarm as well informed and “convinced what is happening is human-caused, and feel it is a serious and urgent threat. The alarmed try to do something in their own lives and support aggressive national response” (Stoknes, 2015, p. 58). This mentality aligns well with the participants of the Final Workshop, who displayed neither nonhuman thought or ecological changes. For the context of this workshop, however, a defining factor amongst these participants was also that they are researching or working within sustainable fields, and thus the nomenclature of this persona has been changed to the ‘changemaker’ to reflect this specific criteria. These are the participants who were unaffected by the workshop designs and not ideal participants for future workshops.

Stoknes’ description of the concerned is that they acknowledge it “is a serious problem and are moderately well informed about the issue….They are distinctly less involved in the issue—and less likely to be taking personal action” (Stoknes, 2015, p. 58). This somewhat aligns with the attitudes and responses of the participants of the Trial Workshops. Unlike Stoknes’ classifications, however, many of these participants were undertaking small personal changes every now and then. As such, references to personas of the ‘Concerned’ will re-appropriate Stoknes’ definitions to include personal action.

These personas begin to highlight the limits and scope of the Stories from the Afterlife workshops; it highlights that the workshop is only effective for particular personas—the ‘Concerned’. This demonstrates that the ideal participants for these workshops are those that have pre-existing ecological thought, but are not consumed by their ecological concern. The results from Stories from the Afterlife hence proves that this workshop design can build on pre-established concerns for those who are open to ecological change, but by no means experts.