Participant reactions to the warped plastics 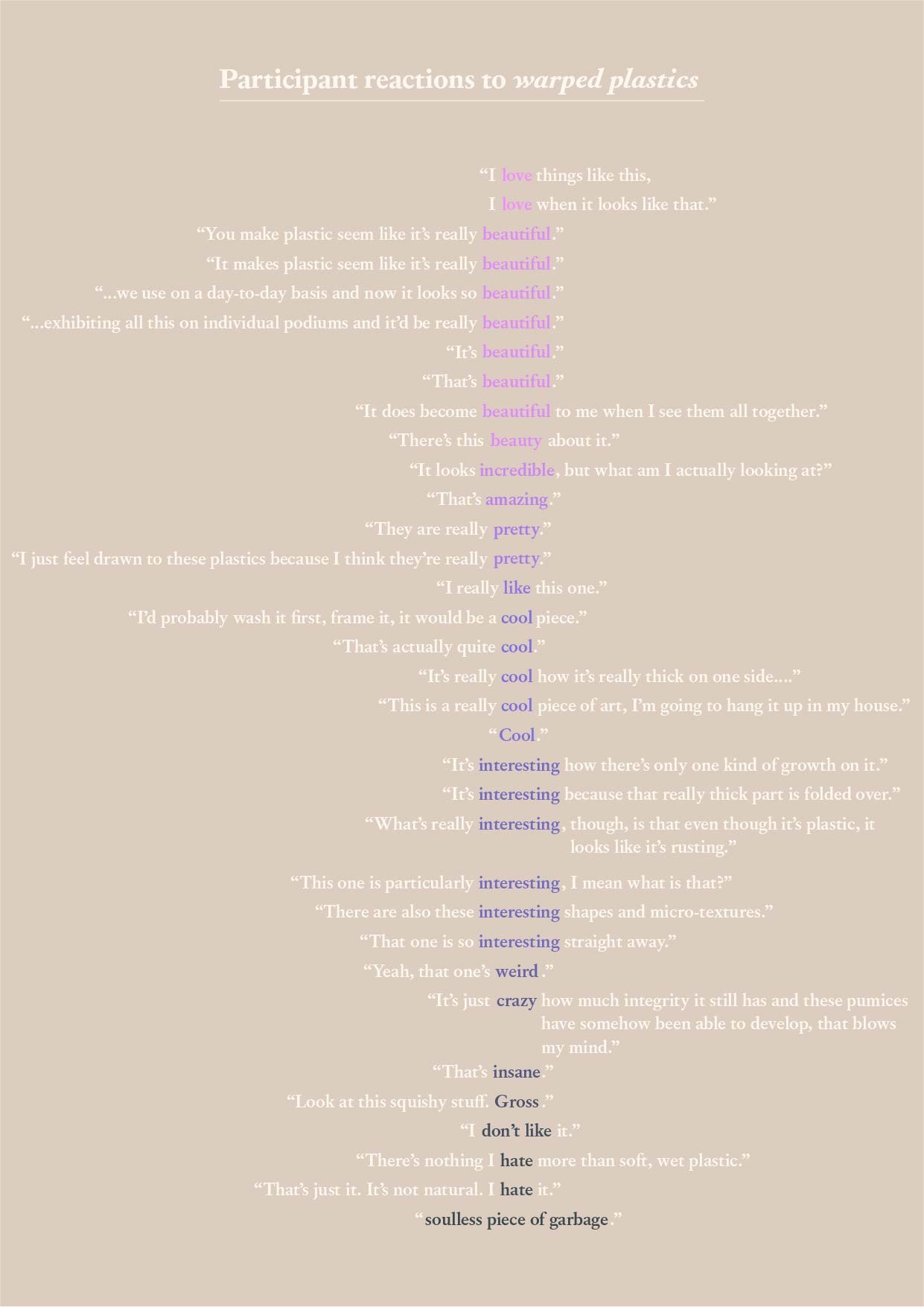 Early prompts in the Stories from the Afterlife workshop asked participants to select, observe and describe one warped plastic. The first prompt in What Now? also asked participants to select and describe one warped plastic. The range of reactions from participants during these activities highlights that the warped materiality of these plastics are affective and do stimulate responses. They also highlight two main ways participants responded to the plastics; through language and through behaviour. This section discusses and analyses these responses in order to draw meaning from them.
‍
The Final Workshops saw a high number of reactions to the plastic from participants. These took on the form of verbal statements, which were documented through the audio recordings of the workshop proceedings. This highlighted that the audio recordings (and their transcripts) could be ‘mined’ or searched for verbal responses as a way of providing tangible evidence of these reactions. Mining the audio recordings of the Trial Workshops also revealed participant reactions that had not been noticed initially. As such, participant reactions from all five workshops conducted (three Trial Workshops, two Final Workshops) are synthesised and presented in this section.

Mapping participant reactions to the plastic highlighted two insights; there was no general consensus reached in terms of how participants reacted to the plastics, and the reactions of participants ranged from very positive (love) to very negative (hate) (Figure 74).
‍
What also became evident from this mapping was how some reactions were more common across participants. When these reactions were abstracted into colour and shape (Figure 75), reactions of ‘beautiful’, ‘cool’ and ‘interesting’ were revealed to be the most common responses. However, as the nature of this research is qualitative rather than quantitative, little meaning can be deduced from the significance of the quantity of occurrence—rather, what is meaningful is that they occurred at all.

Figure 75
A record of the frequency of each participant reaction. 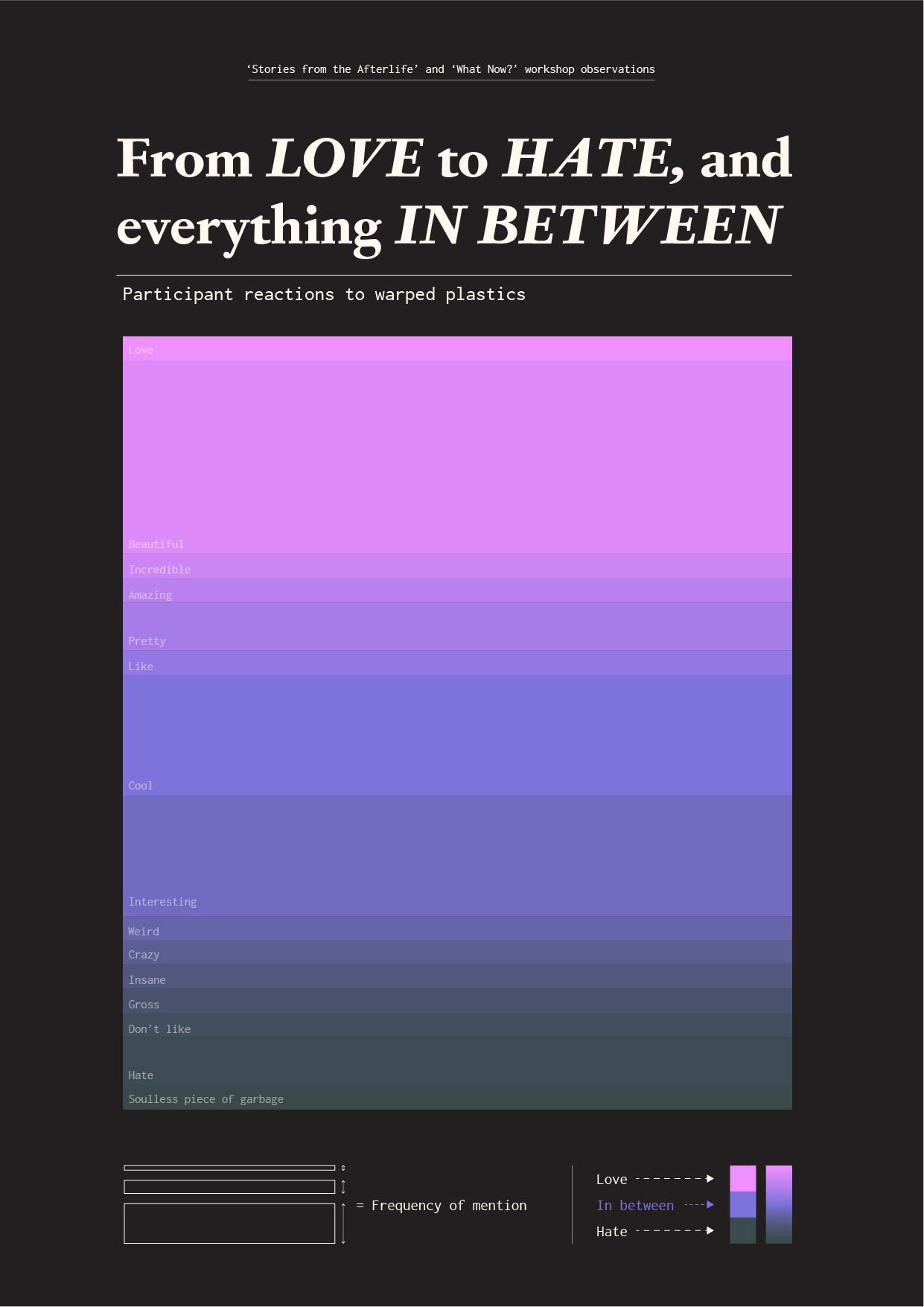 A collation of the participant observation notes also recorded reactions from participants. These can only be described through a written account of the event so as not to lose any ‘data’ or richness of the occurrence, as outlined below:

A reaction of disgust was expressed towards the toothbrush by one participant—aimed at the “squishy” materiality of the padding which had started to decay. When they saw this toothbrush, they said they were glad they had donned gloves.

Another participant refused the option of wearing gloves, stating: “I want to touch them with my fingers”.

Despite both Stories from the Afterlife and What Now? Final Workshops taking place in the midst of COVID-19—and with various sanitary measures becoming the new normal—many participants asked if it was necessary to wear disposable gloves when touching the plastic. This also occurred during the Trial Workshop of What Now?, where a participant remarked that it was “ironic” and counterintuitive to be given disposable plastic gloves to hold waste plastics. This highlights a pre-existing ecological awareness in some of the participants.

Upon reflecting on their choice of plastic items to focus on for the duration of the workshop, one participant stated, “when I entered the room I just knew”, in regards to their choice.

One participant in particular questioned whether the plastics were too beautiful and whether that would have the opposite effect to making people want to consume less plastic:

“It makes plastic seem like it’s really beautiful. But in the bigger picture, plastics are a really damaging thing for the environment, so it shouldn’t be beautiful?”

Another participant found it interesting that they perceived the collection of warped plastics in front of them as beautiful, despite often being repulsed by plastic in stores such as Smiggle. When reflecting on why this reaction occurred, they stated a reason was possibly that the plastics had been “buffeted out” by the ocean and thus resembled more natural materials. Another reason given was that while waste plastics are often seen in the singular in natural environments—and therefore feel out of place and disgusting—the warped plastics in front of them were displayed in a collection and thus appeared more intentional.

These responses to the warped plastics confirm that these artefacts can engage and draw reactions from participants. The mixture of fascination and curiosity in participants highlight that the warped forms of these plastics made them see plastic in ways alternative to its normative representations as packaging, waste or consumer objects. The particular language used by participants made this evident; they described and responded to these plastics as an ambiguous material. I turn here to the writings of philosopher Immanuel Kant (1790/1952), aesthetic theorist Sianne Ngai (2007; 2012) and consumer researchers Caleb Warren and Margaret Campbell (2014) to better understand the implications of the language used by these participants.

The reaction of some participants to regard the plastic as beautiful is a stark contrast to the way plastic and plastic waste is usually perceived in consumer contexts. This highlights that the warping of these plastics shifted the prespectives of participants to regard plastic in new ways, and made them aware of the more material nature of plastic. It also highlights that the workshop itself provided a context removed from consumer mindsets, which allowed for alternative perspectives to emerge. Kant’s statement that a person’s reactions of ‘beautiful’ are made in response to “what simply pleases him” (1790/1952, p. 49) reveals that these participants positively responded to these plastics; they were engaged by the aesthetic and visual qualities of the warped plastics. These particular responses confirm my own considerations of the plastic as beautiful.
‍
The statement of one participant that it was problematic to communicate these plastics as beautiful demonstrates a tension between being captivated by these forms and knowing that this warped plastic should not be admired. This highlights that the visual qualities of these plastics are engaging in ways that might challenge those with pre-existing ecological mindsets, and bring these discussions to the forefront. There seems to be a limit, however, to how much these aesthetic responses can impact others—Kant also describes reactions of ‘beautiful’ as being delight without interest (1790/1952, p. 50). This suggests that reactions of beauty do not facilitate much stimulation outside of the object itself. This supports my conclusion in earlier experiments that purely presenting plastic through aestheticised means cannot directly lead to ecological reflection in consumers.

Warren and Campbell state that reactions of ‘cool’ emerge “when its behaviors diverge from the norm” (2014, p. 543). The participants may have hence regarded the warped plastics as ‘cool’ because it was unfamiliar and outside the norm. These responses support my hypothesis in this research that warped plastics can be used to challenge normative conventions. These responses also highlight that participants were responding to more than the aesthetic of these warped plastics; they began to engage conceptually with what this plastic represented.

Responses of ‘interesting’ also signify a conceptual reaction in participants, and mark a response to the “relatively small surprise of information or variation from an existing norm” (Ngai, 2012, p. 5). The ‘interesting’ is defined by the occurrence of new information and the way this interacts with pre-existing worldviews—“the interesting marks a tension between the unknown and the already known” (Ngai, 2012, p. 5). This definition of interest as a “collision” or “contradiction” (Ngai, 2012, p. 12) illuminates that participants who expressed these reactions were challenged by the plastics in some way through exposure to their existence. This once again confirms that these warped plastics successfully caused shifts in participants. However, Ngai’s statements that these responses are “trivial” (2012, p. 18) suggest that the participants were only slightly impacted by the presence of these plastics. This in turn reveals that being in the presence of these warped plastic artefacts are not enough to powerfully evoke shifts in participants—but are perhaps enough to trigger thought, conversation and reflection.

Instances of disgust and hatred in participants can be interpreted through Kant’s theory that disgust is an object “insisting, as it were, upon our enjoying it, while we still set our face against it” (1790/1952, p. 174). This demonstrates perceptions of the plastic as overtly attacking the viewer with its presence. This is supported by Ngai, in statements that “what makes the object abhorrent is precisely its outrageous claim for desirability. The disgusting seems to say, ‘You want me,’ imposing itself on the subject as something to be mingled with and perhaps even enjoyed” (2007, p. 335). Reactions of disgust, then, can be deduced as occurring only when the viewer strongly disagrees with what the object is presenting itself as, and as an offence to their person and worldviews. This suggests that the existence of the warped plastics affirmed participants’ dislike of plastic itself, and highlights a pre-existing ecological awareness in these participants. This reveals that participants who reacted with disgust still regarded these warped plastics through stereotypical consumer perceptions of plastic; the warping of these plastics did not facilitate new perspectives or ways of seeing the plastic beyond their normative definitions. It is likely, then, that these participants were so subsumed by their ecological hatred for plastic that they became closed off to further exploration.

Did interacting with the warped plastics engage participants?