A second workshop was designed alongside Stories from the Afterlife. Named What Now?, this workshop was less of a direct translation of earlier experiments, and more of a provocation in response to these processes.
‍
This workshop situates participants in an alternate reality which intervenes with and challenges their normative ones by questioning what humans would do if plastic could not be discarded. It uses prompts that bestows custodianship onto participants throughout time to make the problem of plastic tangible and personal for each participant.
‍
One Trial Workshop was conducted in this experiment to test its design.

This workshop design was derived from feedback asking me to consider what happens to these warped plastics after this research project, and after they have been ‘saved’ from their usual fates and put on display. It also sought to explore the reflections raised in Approach Three, which considered what would happen to these plastics after this research. Questions such as these proved personally impactful in shifting my perceptions towards the multi-generational and deep time span of plastic, and as such, they were incorporated into the overall intention and design of this workshop. 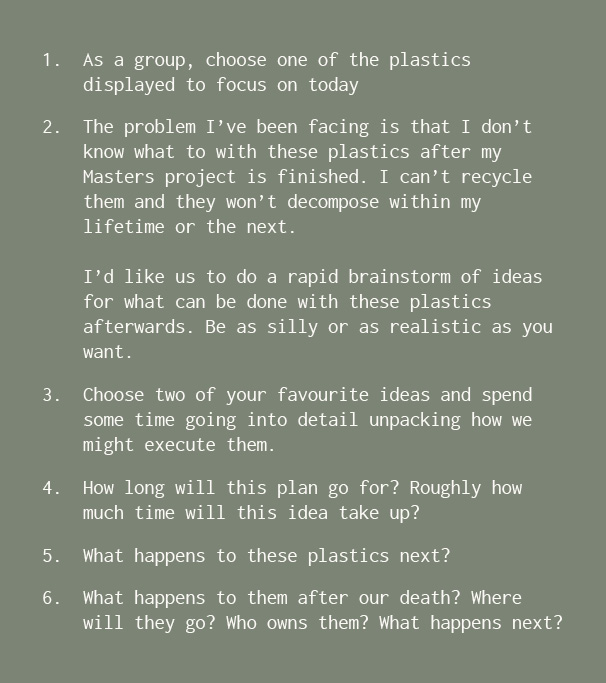 Participants were once again recruited from personal networks. Three designers (professionals) were chosen as participants to test the more informal structure of this workshop design. I chose designers as I thought they would be more open to the abstract and conceptual nature of the workshop, and would provide a comfortable space to test this more informal design. These designers had a pre-existing relationship with me (and with each other). All three participants were grouped into one group and were encouraged to answer the prompts collaboratively.

The methods this workshop used are the same as Experiment: Stories from the Afterlife Trial Workshop—storytelling, constructing stories about time, custodianship, a collaborative workshop structure and brainstorming. 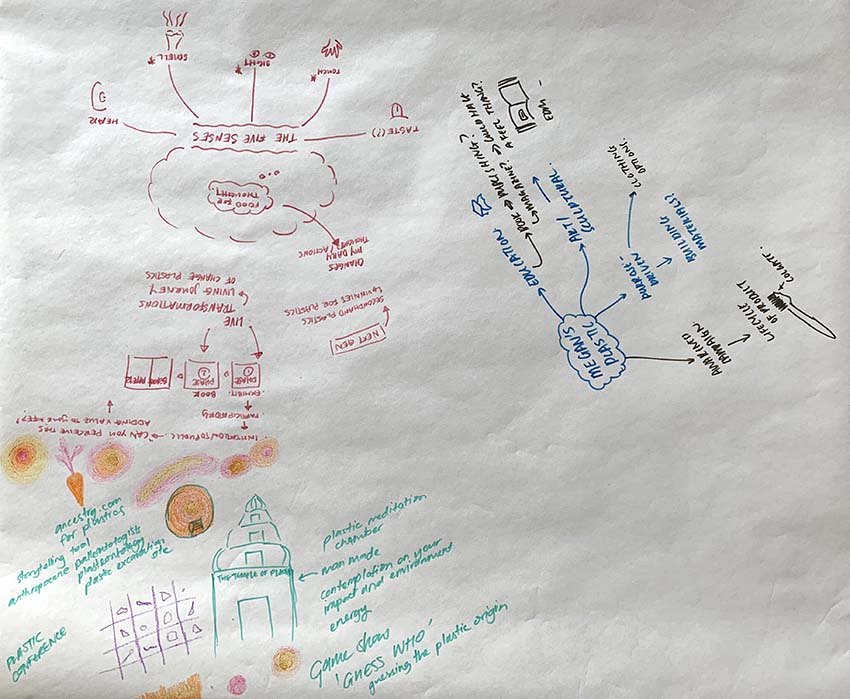 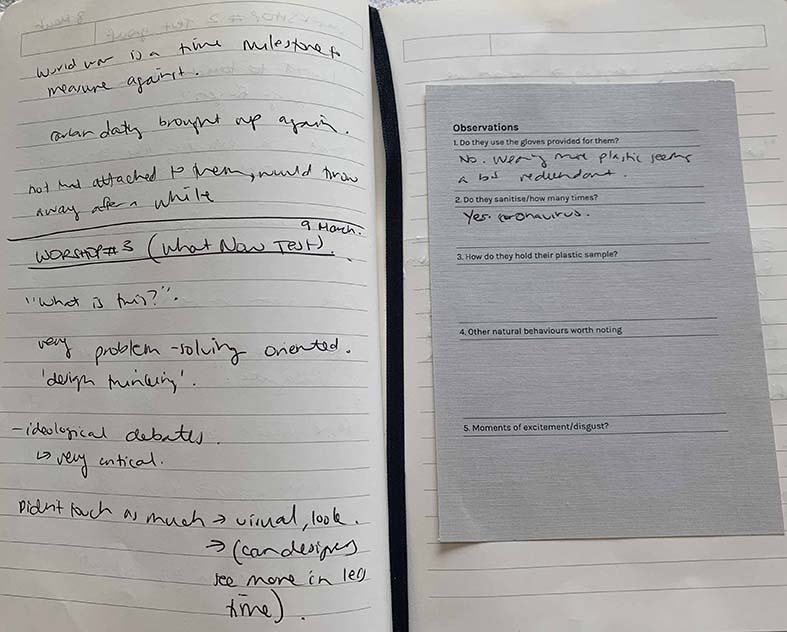 I used the same methods as Experiment: Stories from the Afterlife Trial Workshop: reflective journaling, content analyses and visualising information to analyse the results of the collected data and to derive insight.

The more informal and conversational structure of this workshop design allowed participants to segue frequently into anecdotes about how they used plastic in their daily lives. They particularly discussed buying recycled plastic clothing, using KeepCups, takeaway containers and gladwrap. The situated context of the workshop thus prompted self-reflection in participants about their own plastic consumption habits.

When asked to imagine taking custodianship of plastic, participants responded with the idea to use their waste plastic as the basis of an awareness campaign—one that would be used to generate ecological thought in general consumers (Figure 69). They took an environmental education approach in order to:

“Subvert the whole story of plastic as waste.”

These responses highlight a pre-existing ecological awareness in the participants and demonstrates that the workshop provided a space for their ecological views to be voiced collaboratively and affirmed.

Figure 70
Visualisation of Trial Workshop participants’ speculations on what happens to their plastic after their plans for re-use. 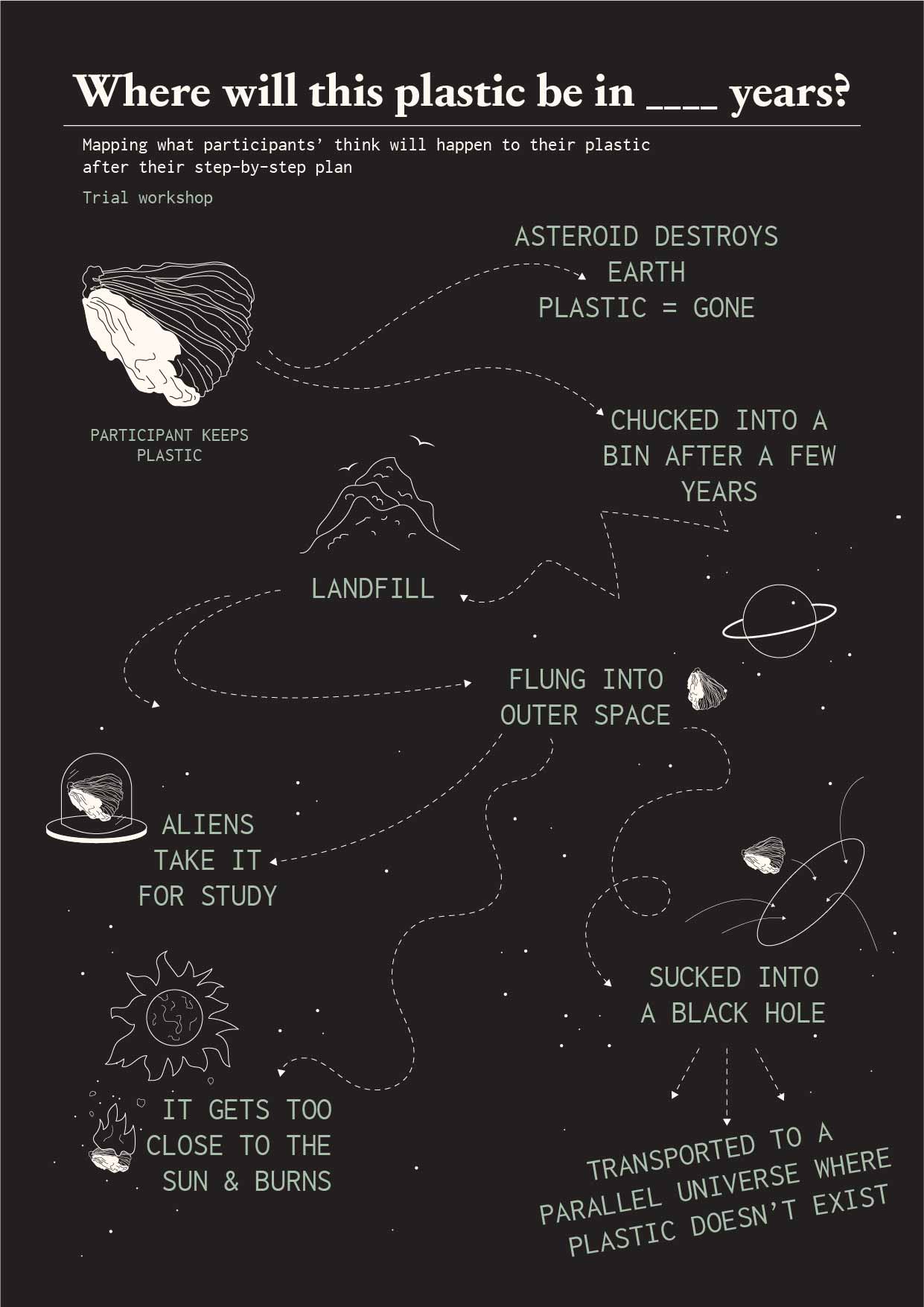 When asked what would happen to their plastic after their campaign ended, one participant responded with:

Encouraging participants to think past their ideated solutions to see the afterlife of their plastic was initially difficult. This highlighted how challenging it is to shift from immediate human worldviews to more nonhuman and plastic-led ones.

It was a turn to time-based prompts about the future of their specific plastic, however, that began to facilitate a shift to nonhuman thought (Figure 70). This was evidenced when one participant hypothesised that their plastic will be in outer space after 80 years. This statement facilitated a shift in participants to plastic-led perspectives, and allowed them to consider how their plastic might exist in outer space:

“But in outer space wouldn’t it decompose or something? Do you think it would explode?”

Specifically, it was this shift to more fictional and imaginative contexts of outer space that allowed participants to move from real-world perspectives and instead begin to adopt both plastic-led and nonhuman frames of mind.
‍
When prompts of ‘what now?’ continued to be asked after each new idea, however, one participant exhibited exasperation and remarked:

“You’re giving me an existential crisis.”

Figure 71
Annotated participant responses to the What Now? follow-up survey. 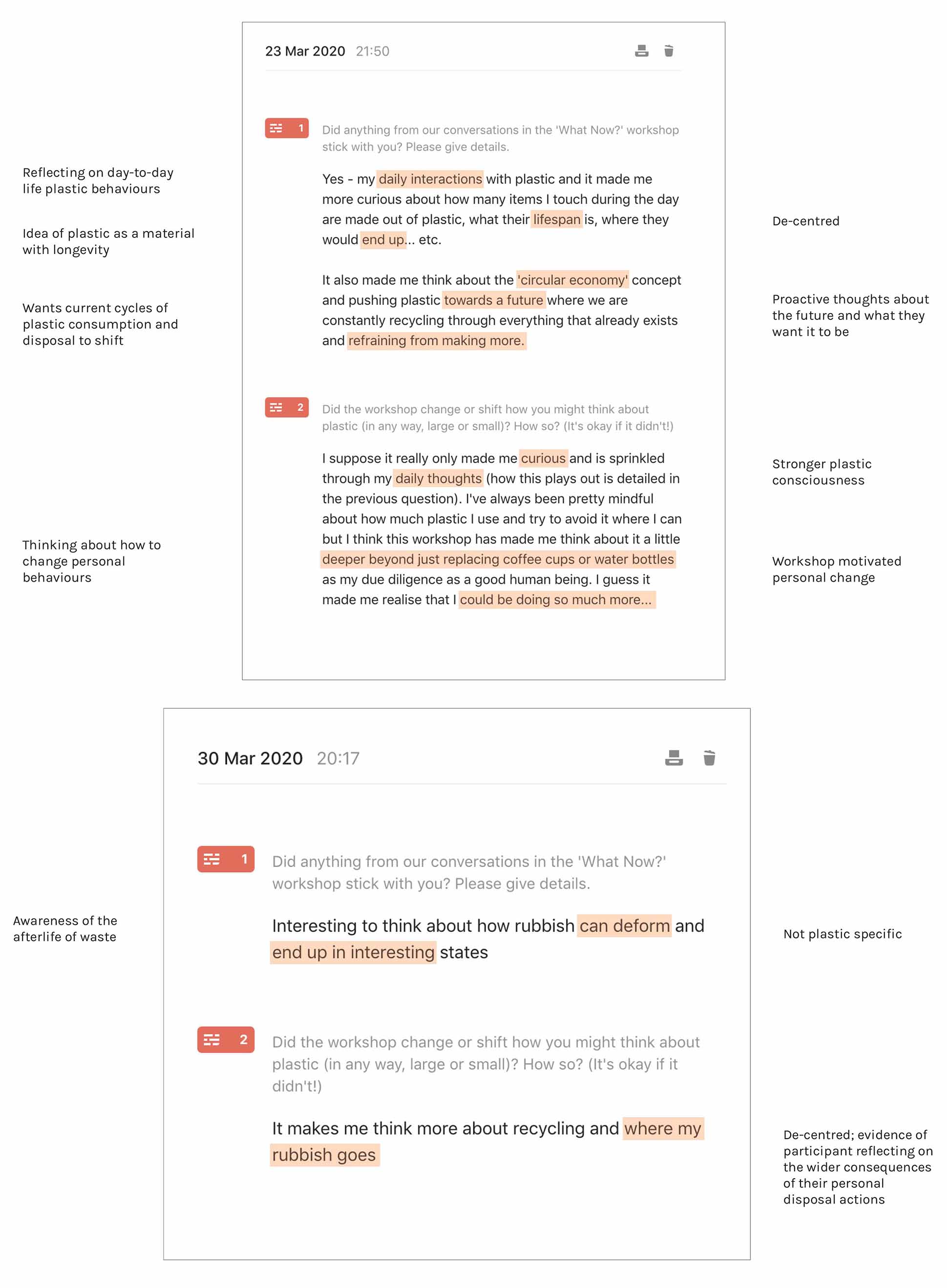 The responses to the second question once again makes evident the ecological concern these workshops can facilitate. While one participant expressed stronger motivation to improve their own ecological practices, the other participant stated that the workshops made them think more—provoking ecological action in one participant and ecological thought in the other. These outcomes highlight that the workshop’s explorations of waste through ideas of custodianship and deep time storytelling can be successful in encouraging participants to reflect ecologically on their personal day-to-day behaviours of disposing and consuming.
‍
Interestingly, one of the responses from a participant signified an increase in ecological thought in general and was not plastic-specific—highlighting that concepts of plastic consumption and sustainability are interrelated and that they can mutually affect one another.

The initial responses of participants to the prompts revealed that the framing of the first prompt (Figure 66) was not suitable for the types of responses I wanted. Like the reflections in Experiment: Stories from the Afterlife Trial Workshop, I needed to take myself out of the prompt questions and make them participant focused instead.
‍
I also realised that throughout all the workshops conducted, my participant observations were not as useful as I had hoped. Participants tended to state quite freely what they were thinking; the audio recordings were the more valuable data for identifying participants’ shifts in thought.
‍
The participants’ turn to more fictional scenarios in responding to questions about their plastic’s afterlife—compared to their initial evasion of the topic—suggests that thinking about the future is difficult. Particularly, it was thinking through the future of an inanimate object that was difficult. This aligns with Bennett’s assertions that it is normal to regard objects and waste as “passive” or “inert” (2010, p. vii). Asking participants to consider the future of a seemingly inert object may have therefore prompted more out-of-the-ordinary responses. The participants responding with fiction can thus be interpreted as forming a natural response to a question that was seemingly asking for this kind of response. Despite these more fictional responses, genuine considerations about what would happen to their plastic within these realms was considered and discussed. The creation of fiction hence assisted in facilitating shifts to nonhuman thought.
‍
It was questions of time and persistent time, paired with the introduction of fiction, that led participants to adopt these wider-than-human perspectives. This was particularly evident in one participant’s existential response to continued prompts of ‘what now?’. This response was particularly promising, as it suggested that they began to feel de-centred from a human reality. Stretching their imagination far into the future—and forcing consideration about what continuously happens to their plastic—challenged this participant’s understandings not only of reality, but also of what plastic is and what happens to it after disposal.

The results of this workshop proved successful in shifting participants to tangibly recognise the longevity of plastic. As such, this workshop design was also enacted as the finalisation of this research project. Similar to Stories from the Afterlife, participants outside of my own networks needed to be used for these final workshops to confirm that this workshop was effective for those without an established relationship with me.