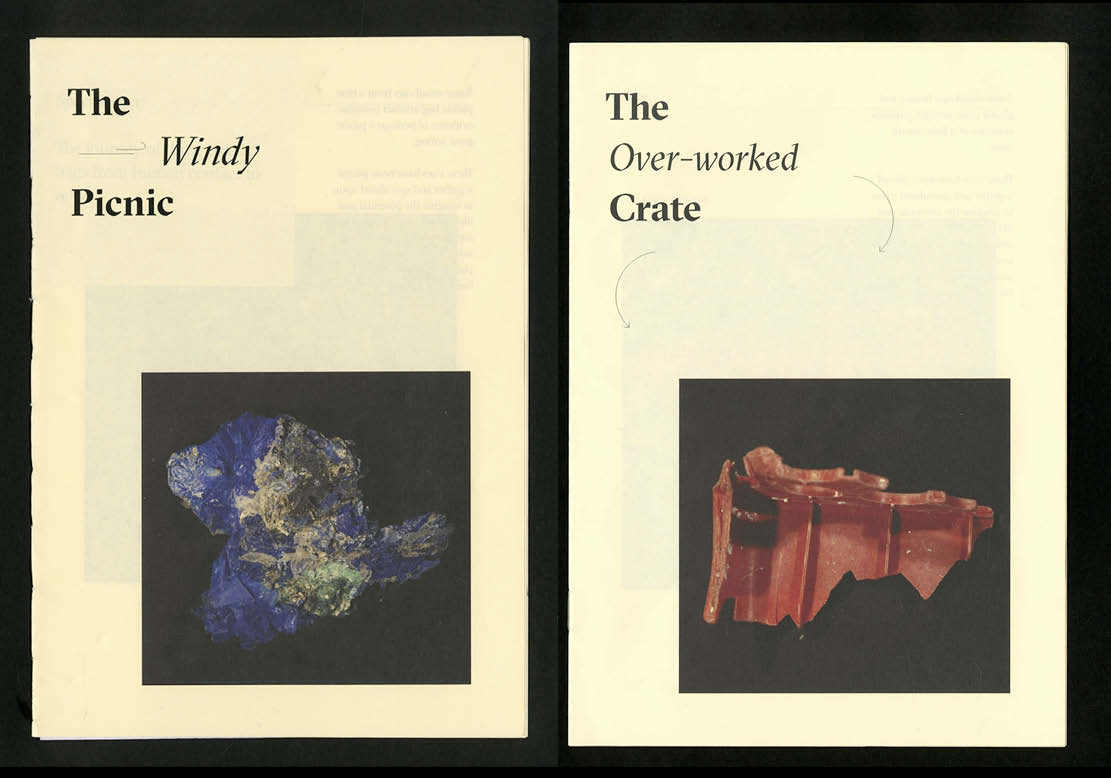 To invoke considerations of the journeys and lives discarded plastics experience in consumers, through the medium of storytelling. In telling stories from the ‘perspective’ of plastics, this experiment sought to make consumers aware that one piece of plastic, no matter how apparently insignificant, can have wide ranging and global consequences.

This experiment builds on Experiment: From here to there, but refines the storytelling process to include visual imagery. This was an attempt to make the stories about plastic more digestible for viewers (as opposed to the text-heavy form of receipts). 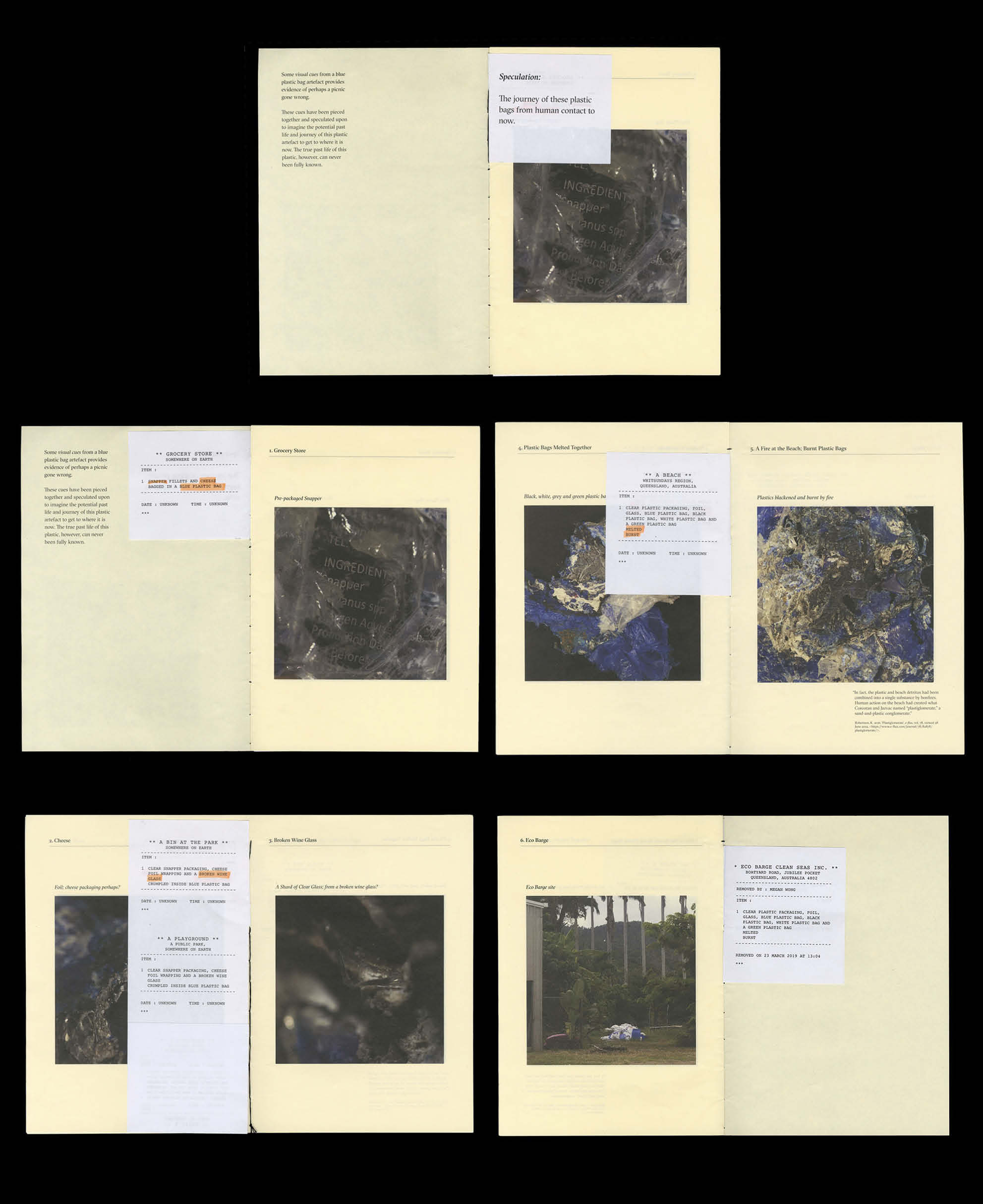 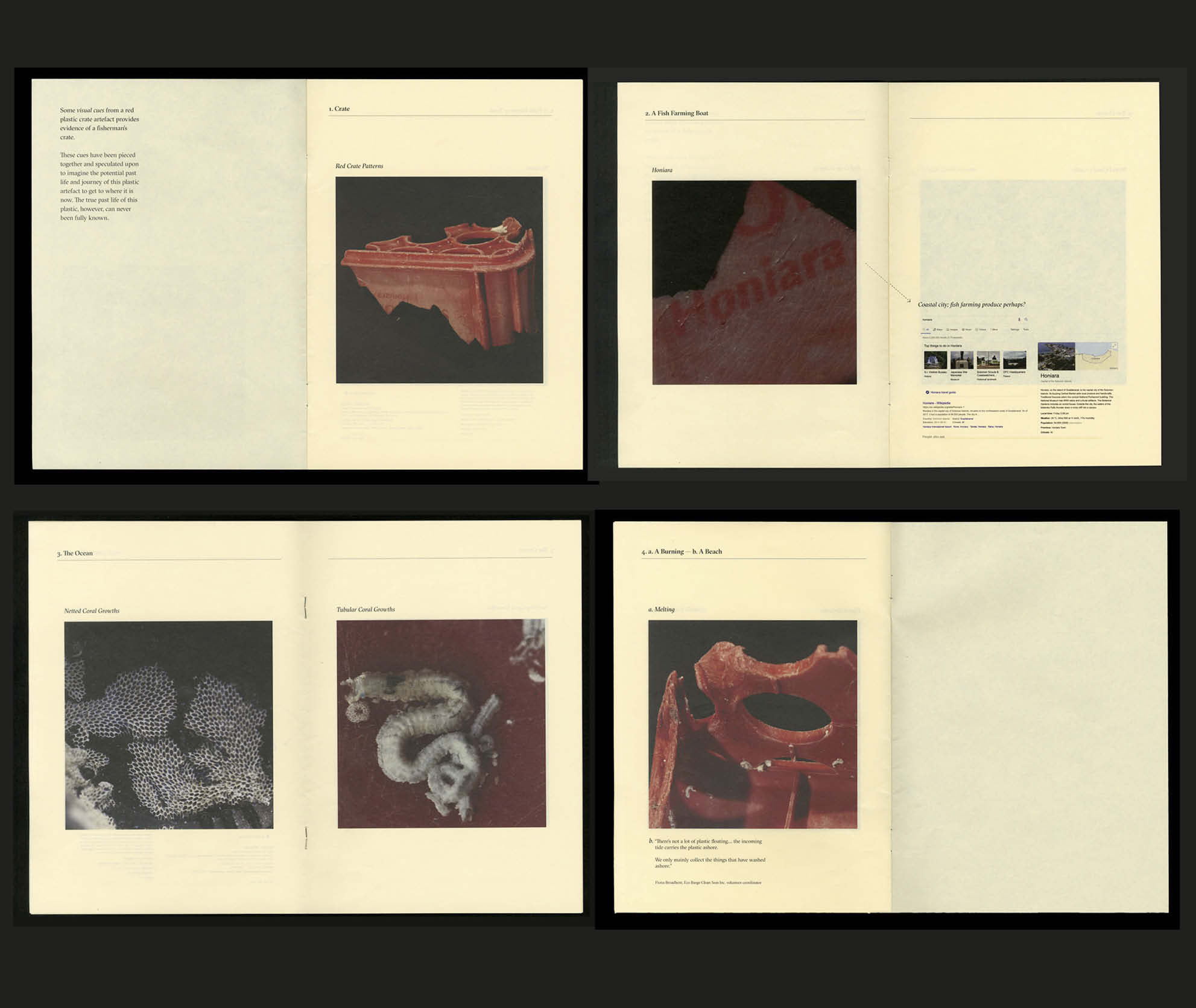 For a few plastic items, there were visual cues or clues (in the form of labels or text) which hinted at what these plastics were used for and where they came from (their past lives). For example, a warped plastic bag included part of a seafood snapper label, and the red crate featured text which pointed to the Solomon Islands (Figure 45). These clues were used to abductively speculate on the circumstances which led to the plastic being discarded.

Personal understandings of how the plastic was used, moved through spaces and was discarded were drawn upon to formulate these stories. This process was visualised in the form of a diary which highlighted the visual cues and the ways these personal understandings influenced particular parts of the story’s formulation. Language and imagery were used to enrich the stories of the plastics further, and to engage consumers more (Figure 43 & 44).

While this experiment did connect the warped plastics back to human contexts, the stories created in this experiment were too fragmented and proved difficult to follow; more creative license in bridging gaps was needed. It became clear in this experiment that I was cautious of creating fictional stories and of straying too far from what could not be visually evidenced by the plastics themselves. This revealed that I was still operating under assumptions that we need ‘facts’ to shift the perspectives of consumers. Notions of custodianship and deep time were hence lost in these stories.
‍
I also questioned whether this form of storytelling would be effective in speaking to consumers enough to shift their perceptions of plastic as disposable. It would require both heavy accompanying explanations of the work on my part and self-motivated reflections in viewers for them to come to these realisations.

I began to realise that I couldn’t keep making stories to disseminate to consumers—the same questions of whether consumers would connect to and be impacted by my storytelling outcomes meant that a change in approach was needed, one that considered how these stories would be given to and interact with consumers.